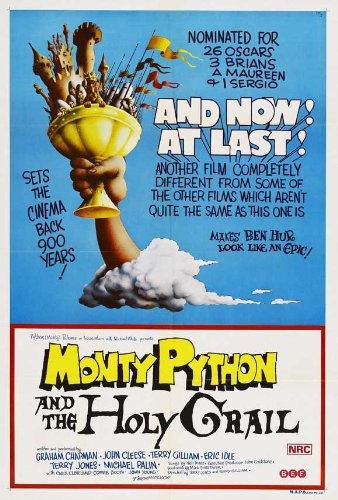 Our first Film Feast event of 2020 is a 45th Anniversary screening of Monty Python and The Holy Grail with the option of a Monty Python themed menu in the restaraunt to accompany the film!

In memory of the tragic recent passing of Python member Terry Jones, £1 from each ticket sold will be donated to the Alzheimers Society.

The first feature film of the legendary Monty Python group takes us on a medieval quest in England, circa 932 A.D. Wise-cracking, sublimely irreverent and jaw-droppingly hysterical, this comedy will bring laughter (and coconuts!) to our lives when we most need a dose of anarchic Python daring.

Monty Python and the Holy Grail follows King Arthur (Graham Chapman) who is accompanied by his trusty servant Patsy (Terry Gilliam) to seek knights to join his round table at Camelot. The quest isn’t, however, as easy as it might sound: constitutional-obsessed peasants, a Three-Headed Knight and singing dancers of Camelot are only a few of the characters that our merry group of knights will come across on their journey. And did we mention the coconuts already?

PLEASE NOTE: Pre-booked tickets for all our performances (including films) are non refundable.

Understand Film Certificates
Click HERE
Our Website
We update our website daily. All information is correct at time of updating. We welcome a confirmation call if you prefer. If you have any suggestions on how we may improve your online experience, please email us HERE